This NAIDOC Week we are collectively reflecting on and learning about the survival, history, living culture and achievements of Aboriginal and Torres Strait Islander peoples. This week our teams have been invited to reflect on our connections to the Aboriginal lands on which we work, and on the excellence in evaluation practice being showcased by Aboriginal and Torres Strait Islander people. This blog is from our Meanjin (Brisbane) office, on Yugara and Turrbal lands.

Maiwar, the Brisbane River is a very bendy beast. Sometimes amidst its winding coils, when you think you know where you are, you suddenly realise you are somewhere else entirely. It is slippery, like a freshwater eel, totem of the Turrbal people. 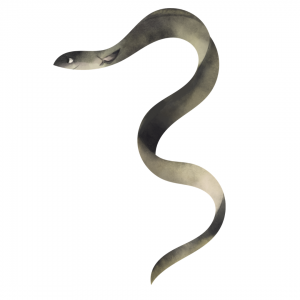 I am a person who loves having my mind changed. I love knowing that there are many ways to see the world: having the opportunity to flip my perspective gets my brain buzzing!

Through my studies, working life and play I’ve sought out and had some wonderful opportunities to learn from with Aboriginal and other indigenous people and organisations. These experiences have had the wonderful effect of shoving many of my unquestioned assumptions out into the harsh light of day, where they can be examined properly – the first step to a new mindset – and then challenged. For this I’m forever appreciative!

They have also taught me how to be a better listener, how utterly essential relational aspects of interactions are (slow down task-focussed brain!), to look for negative space when stargazing, and have deepened my appreciation of observation as a scientific method.

City planners these days have to take notice of ‘desire paths’ – the ways in which people traverse an area based on their own needs and desires, regardless of whether there is a set of stairs or a paved walkway. Desire paths are ignored at a city planner’s peril – utilising the feedback of feet to co-design means more useable cities. Sometimes, though the knowledge of generations is already buried beneath the paths of our modern cities.

One of my favourite facts about Brisbane (which is also true of much of Australia) is the use of Aboriginal tracks as the basis of our current road infrastructure. Waterworks Road, for example, was once a track leading to Mount Cootha (kuta in Turrbal – meaning honey bee). The city is criss-crossed with these ‘desire paths’ made by generations of Yugara and Turrbal people, and other groups passing through. Roads were also used as exclusionary tools (not the many ‘Boundary’ roads and streets around Brisbane.

“Let no one say the past is dead. The past is all about us and within.”

I’ll never be done having my mind changed, or learning about the culture, history and ingenuity of Australia’s first people. I’m grateful I get to do my learning, work and play on land that always was and always will be Turrbal and Yugara land, and for the windy, bendy banks of Maiwar, my favourite perspective-shifting river.  Like the eels born in Moreton Bay, who know to return to the creeks of their mothers, if you follow Maiwar for long enough, you’ll eventually find your way home.