What’s the meaning of NAIDOC?

We celebrate NAIDOC week each year during the first week of July (Sunday to Sunday). NAIDOC stands for National Aborigines and Islanders Day Observance Committee and the week’s purpose is to recognise and celebrate Aboriginal and Torres Strait Islander communities, culture, history, and achievements.

Where does NAIDOC Week come from?

NAIDOC can be traced all the way back to the 1920s, when Aboriginal communities and rights groups came together to boycott ‘Australia’ Day by protesting about the mistreatment of Aboriginal people.

These protests birthed the Day of Mourning in 1938, when thousands from the Australian Aborigines League and the New South Wales Aborigines Progressive Association gathered, to speak out for the equal rights of Aboriginal people as citizens[1]. Days later, William Cooper (founder of the Australian Aborigines League) led a deputation to meet with the Prime Minister, and the Minister for the Interior, to call for Commonwealth control of Aboriginal affairs, with a separate Ministry of Aboriginal affairs, equality and full citizens’ rights in all things[2]. The PM rejected this, stating the Commonwealth did not hold constitutional power to make laws for Aboriginal people.

In 1955, the Day of Mourning was moved to the first Sunday in July to celebrate Aboriginal culture. This led to the formation of the National Aborigines Day Observance Committee (NADOC) and the second Sunday of July became a day of remembrance for Aboriginal people.

In the early 90s, NADOC became NAIDOC to include Torres Strait Islander communities and changed to a week-long celebration of Aboriginal and Torres Strait Islander people and culture (from the Day of Mourning to the Day of Remembrance). Today, the National NAIDOC Committee (NNC) makes key decisions on the NAIDOC activities, theme, poster competition winner and NAIDOC award winners.

What does this year’s theme mean to me? 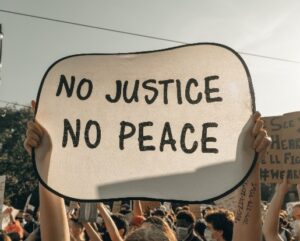 As a young Aboriginal woman, this year’s NAIDOC speaks to accountability and how we can all come together to stand up for what’s right for community. ‘What’s right’ will differ from person to person based on their history and background but for me, it lies with stopping Aboriginal deaths in custody, and also supporting those transitioning out of custody to thrive, to prevent them from re-entering a system built on institutionalisation rather than rehabilitation.

Currently, one of my passion projects at work is with Indigenous-owned business Ninti One on the evaluation of the Lemongrass Place pilot, a community transitional learning centre (CTLC). The centre is designed to support Aboriginal men from the APY lands to transition back into community by linking them to services in their communities and supporting job readiness.

This project recognises the need for community-based justice responses, based on lore and culture rather than institutionalisation, if we want to change outcomes for Aboriginal people in the justice system. It also aligns with Justice Reinvestment – which aims to redirect funding away from prisons and into communities with high rates of contact with the criminal justice system, and recidivism, through both community-led initiatives and state-wide policy and legislative reform[3].

I believe by handing back justice systems to community, we will move towards systemic change and community empowerment.

What’s on for NAIDOC this year?

A few of the many events on this year include: